The BBC called it “the streets that refuse to die”, The Guardian newspaper “The Liverpool locals who took control of their long-neglected streets” and The Independent newspaper celebrates how the project of Granby Four Streets have received a nomination for the Turner Prize (one of the most proclaimed art awards in the UK) for their community regeneration project lead by the studio Assemble.

The Granby Four Streets are a cluster of terraced houses in Toxteth, Liverpool that were built around 1900 to house artisan workers. Following the Toxteth riots in 1981, the council acquired many of the houses in the area for demolition and redevelopment. Hundreds of people were moved out of the area and houses subsequently fell into disrepair. Nevertheless there had always been a strong sense of community through the riots, before them and afterwards.6

People built this community back in the 60´s and 70´s, different circumstances led to a decline in the city of Liverpool that affected many of its areas. Toxteth was one of the worst after the 80´s riots when most people left; today, it is the people again who are rebuilding this place: a small group of organized residents who decided to take matters into their own hands. Their actions have started to make a positive effect that has now become a phoenix bird flooding life once again back to their streets. 5

After several decades of top to bottom approaches from the government to regenerate the area it was a bottom -up approach what made the difference. Local residents started planting flowers via a guerrilla gardening, cleaning their streets, painting empty houses. They organized a monthly market selling cakes, vintage clothes and Caribbean food.

In 2011 they formed a Community Land Trust CLT and attracted funding from investors and later on teamed up with the young London architecture collective Assemble to help them design their vision : “to create a thriving, vibrant mixed community, building on its existing creativity, energy and commitment, where people from all walks of life can live, work and play.” 3

It is clear that the protagonists of this story are the residents who stayed in the area, fighting against demolition and failed government strategies to rebuild it. What this residents showed it’s that community engagement and leadership are crucial when managing the impact of decline on built environments. Policy makers need to ensure that local authorities and neighbourhood leaders are given the responsibilities and resources needed to deliver change.

Strategies should focus on delivering the best outcomes for People as the US academic, Ed Glaeser, has previously argued, “the starting point for any serious urban policy is to recognise that the government’s objective should be to enrich and empower the lives of people, no matter where they live”.

Granby has a very unique cultural and social background. It has the oldest black community in Britain and has also been one of the most deprived communities in the UK for decades. Thirty years ago it used to be a busy street with diverse businesses thriving. Post- war demolitions affected the North end of Granby, several Victorian terraces where replaced with modern homes. By the mid-70s the area started to decline as unemployment increased.

Unemployment, segregation and demolition finally paid its price and riots emerged in 1981, life in Granby became unbearable. Most shops went out of business, empty houses began to appear and the negative perception of the area became a vicious circle. 8

Currently, the project has been nominated for the Turner Prize, the area has gained a very different attention from that of 1981. The project done by the studio Assemble with the hard work of the CLT has now become a lighthouse for the whole of Granby. It is incredible that the heroic efforts of the individuals to make a difference in the quality of life of Granby have been rewarded with this nomination.

It is remarkable how much attention community building is creating. As the director of the Middlesbrough Institute of Modern Art said: “This is what’s happening,” he said. “It is working away from art as entertainment. These are artists working in very specific circumstances to make something happen, to make something change. It’s very positive for the future of art – they are trying to do something rather than just represent something.” 4

This is the magic that Assemble has contributed to Granby, it is art that is addressing real situations with real interventions. As Hudson also describes them: “This is collective activity working in society.” 4

Granby is offering apprenticeships and jobs for local people, where unemployment is a major concern, especially among young people. The CLT is properly looking to rebuild the community with the community, boosting local economy while offering its residents to shape the area´s development.

The project offers training opportunities for young locals and who wish to learn vocational building and construction skills. The young people are mentored by local professional tradespeople and supported in working towards achieving a City & Guilds qualification over the course of the project. 6 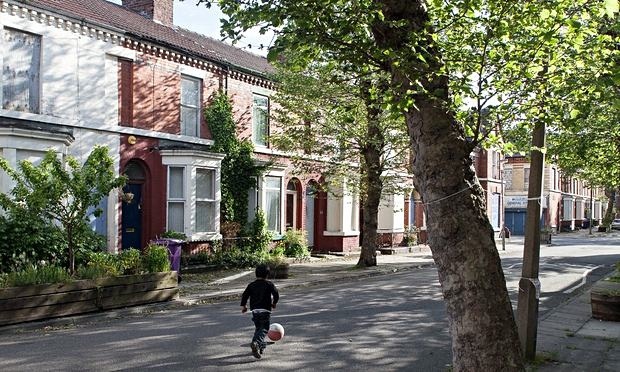 One of the streets in Toxteth redeveloped by the Granby Four Streets community land trust. 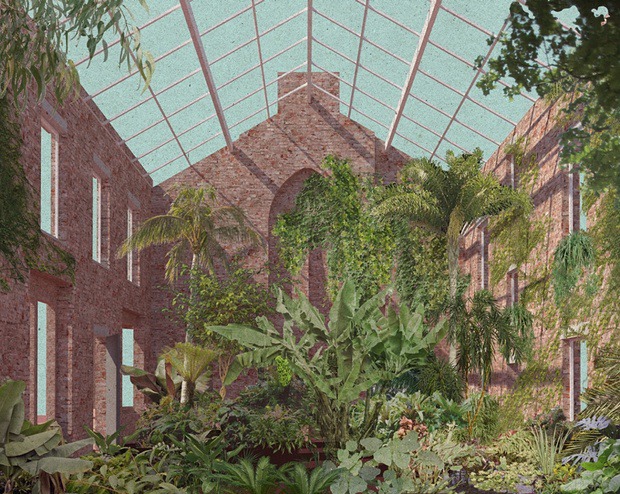 Assemble’s proposed winter garden for a gutted house on Ducie Street in Toxteth. 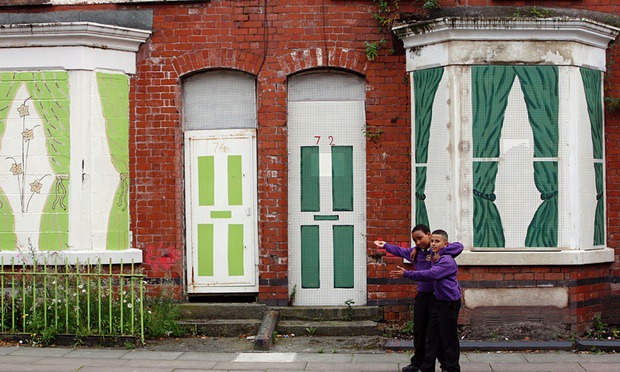 Relentless rows of boarded-up windows ... school children outside a house in Toxteth, Liverpool. 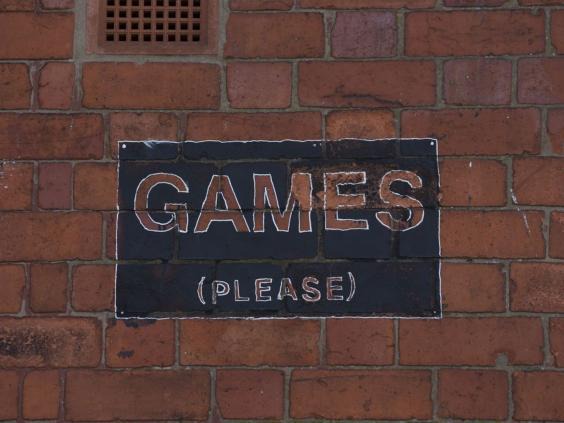 Street art promoting to play in the streets. 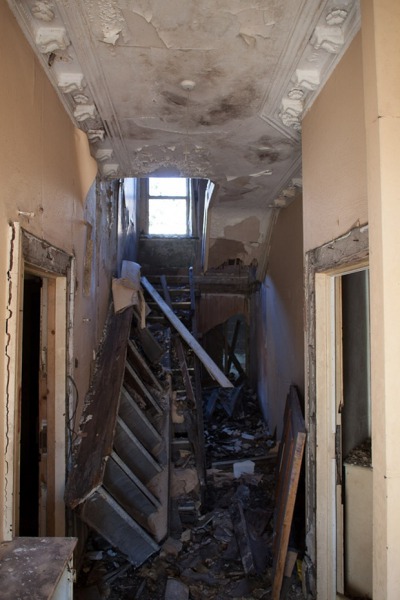 Inside one of the boarded-up houses in Toxteth 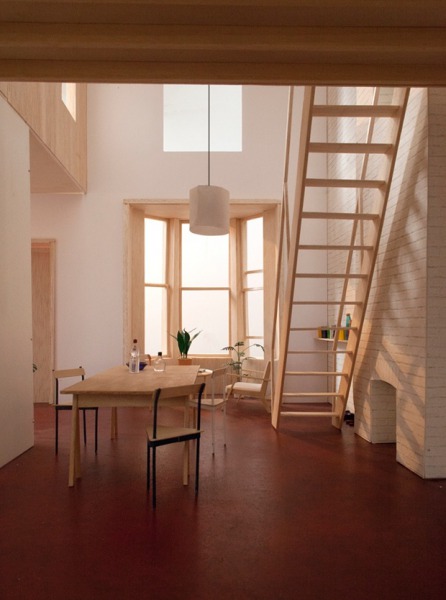 Inside one of the boarded-up houses in Toxteth. 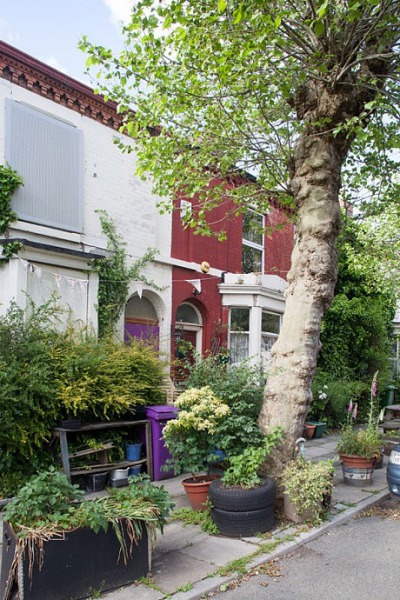 Gardening guerrilla was one of the first strategies to bring Granby back to life. 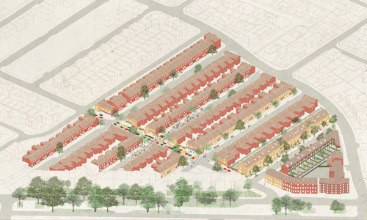 Sketch of one house 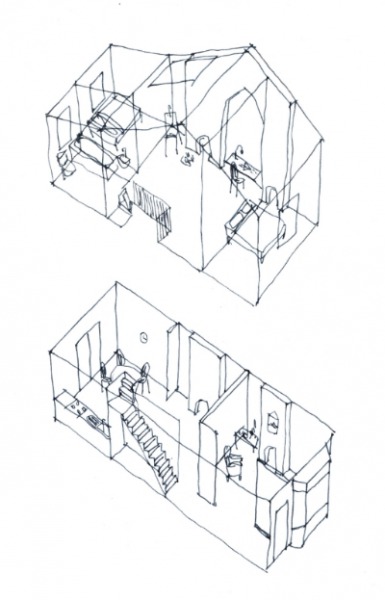 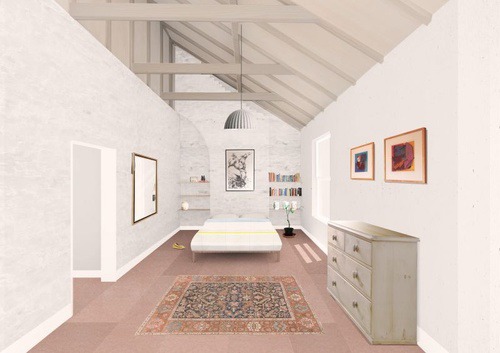 Interior image of one bedroom